A film by Helmut Dosantos

A portrait of a nation through its land and peoples.

Gods of Mexico is a creative documentary that delves into ways of resistance to modernization in rural Mexico. It is a tribute to those peoples who strive to preserve their cultural identity.  An initiatory voyage through faces, age-old gestures, and traditions of hundreds of individuals who remind us that it is still possible to live in tune with our essence as human beings. We will explore this “Lost Atlantis” where countless possibilities of existence continue to resist in the shadow of that kind of progress which- striding at a fast pace- clouds the memory and bewilders any critical consideration on values still worth to follow.

Helmut Dosantos is a screenwriter, director and producer.  His first mid-length film "Dissent" has been exhibited at more than 30 festivals around the world, and has received numerous awards. Dosantos is the founder of the production companies Narvalus Films and Fulgura Frango, based respectively in the US and Mexico.  Recently, he co-produced the documentary "Tony Driver" (Film Critics’ Week, Venice 2019) with Dugong Films (“The Samouni Road”, Best Documentary, Cannes 2018). He is also co-producer of the next scripted feature “Noche de Fuego" by award-winning director Tatiana Huezo (“Tempestad", 2017), produced by Nicolás Celis ("Roma" by Alfonso Cuarón). Dosantos is currently directing and producing the feature documentary “Gods of Mexico.” 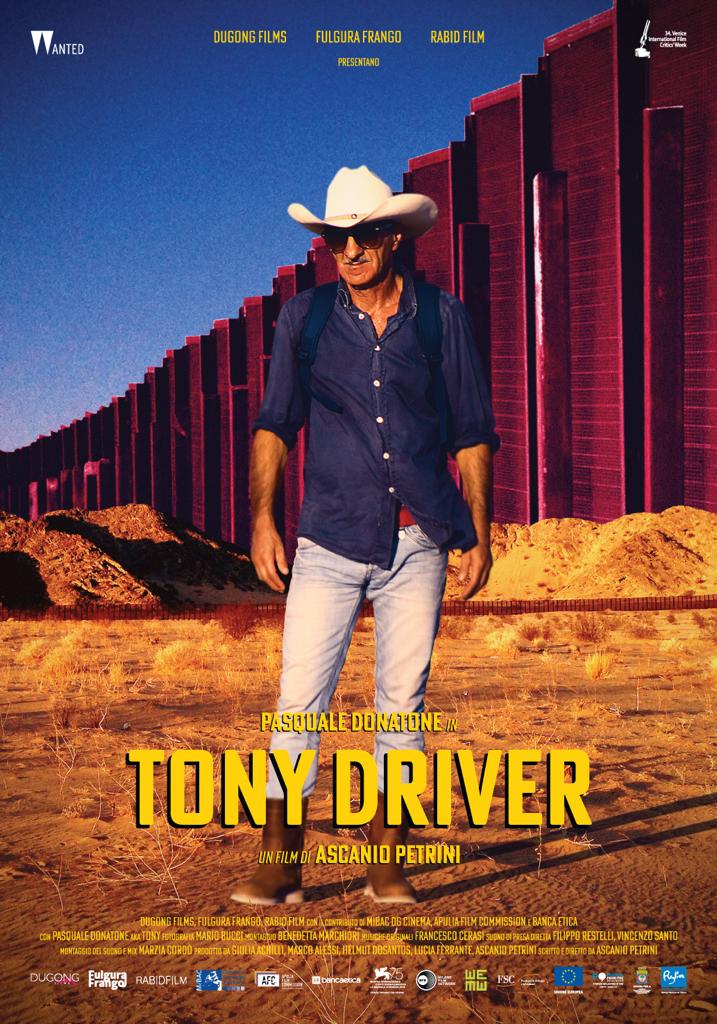 A documentary by ascanio petrini

One day, Pasquale decides to change his name and to be called Tony. Because despite being born in Bari in the mid 60s, he crosses the ocean with his family at 9 years of age and grows up as a real American. He becomes a taxi driver in Yuma, but he is arrested due to his “side job”: carrying illegal immigrants to the US through the Mexican border. He is therefore forced to choose: jail in Arizona or deportation to Italy. Once back in the region of Puglia, he finds himself living alone in a cave in Polignano a Mare, looking at Italy as a small, stuck country, with no opportunities and without dreams. But Tony is not willing to surrender…

Ascanio Petrini (1979) was born in Bari. A DAMS graduate, he directed a few short films, among which Piscio, presented at Cortodorico and among the finalists of Nie Wiem. His first documentary Salva la cozza was selected at Sguardi Altrove Film Festival in Milan, and RIFF in Rome. He has been working as a first assistant director on several Italian and international films. Tony Driver is his debut feature.

Winners of Gabriel Figueroa Film Fund – Work in Progress will be announced during the closing ceremony (November 17th) of the 8th edition of Los Cabos International Film Festival which will take place from November 13th – 17th, 2019 in Los Cabos, Baja California Sur, Mexico.

Proud to announce that Ascanio Petrini’s film TONY DRIVER is in competition at the 34th VENICE INTERNATIONAL FILM CRITICS’ WEEK, during the 76th VENICE FILM FESTIVAL (28.08 > 07.09)